Went on a weekend trip with family to Pushkar in Rajasthan. Had a lovely 7 hour drive from Delhi halting on the way for coffee and snacks. 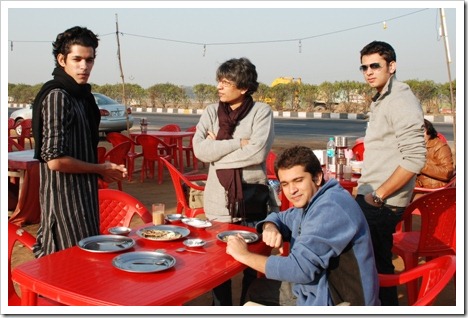 Utsav, Angad and Kartik with Anita at the Dhaba

Entered Pushkar around 3 and headed for the Green House Resort where we were staying. A very nice tented accommodation with all luxuries and comforts. 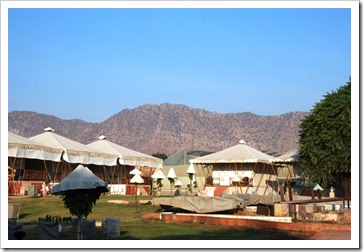 The Greenhouse Resort is about 7 kms outside Puskar and is located on the foothills of the Aravalis. The resort has made extensive use of drip irrigation to really green up the place and there is an abundance of flowers and plants though the area is very dry and arid. The morning woke us up with the chatter of Babblers – very noisy birds, If you are lucky,  peacocks can be spotted in the fields. Mornings in December are crisp and chilly and the air is absolutely clean.

Pushkar is a holy city. It is a pilgrimage spot and scores of devotees visit Pushkar daily . A rough estimate of the no of temples in Pushakar is 500 temples!!

View of the Temples surrounding the Pushkar Lake

The most prominent place in Pushkar is the Puskhar Lake or Sarovar as it is called. The Sarovar is surrounded by temples, the most prominent of them being the Brahma Temple built in the 14th century,  one of the few temples dedicated to Lord Brahma. It is believed that Lord Brahma along with all the Gods and Goddesses performed a special ceremony here. Legend also has it that the Sarovar Lake was formed miraculously when a lotus fell from the hands of Brahma. ( The pity is that the lake is now completely dry),Very few temples to Lord Brahma exist anywhere in the world. Other temples of Brahma include those at Besakih in Bali, Bithoor in Uttar Pradesh, India, village Asotra near Balotra city of Barmer district in Rajasthan and Prambanan in Indonesia. The Pushkar lake 52 ghats where pilgrims descend to the lake to bathe in the sacred waters.

Posted by pravine chester at 10:14 PM