THE RAVENS OF THE TOWER OF LONDON

If you are a visitor to the The Tower of London, don't be surprised when you come across some large black birds that look like over sized crows. These are the Ravens of the Tower of London and have a history almost as old the tower itself. 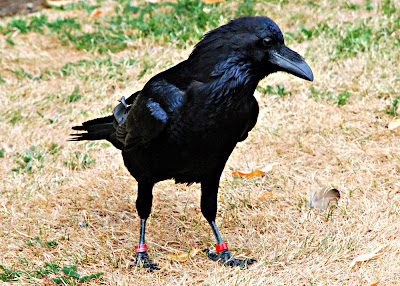 One of the ravens at the Tower of London
There is no authentic record of when these ravens first appeared at the tower, their presence is however surrounded by myths and legends. Legend dictates that at least 6 ravens must always remain at the Tower else the Tower and the Monarchy will fall.
To prevent the ravens from flying away from the Tower, their wings are clipped and have pens to live in. 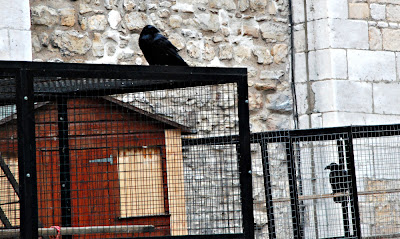 ﻿Pens in which the Ravens live
﻿Currently there are seven ravens at the Tower - this is so in case one of the ravens dies or escapes, six will always remain. 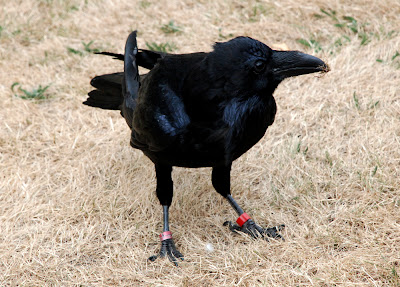 ﻿Raven with it's wings clipped
All seven ravens at the tower have names and have their wings clipped. One of the Yeoman warders is the Ravenmaster who cares for the birds.
The Legend of the ravens of the Tower can be traced back to a Medieval chronicler - Geoffrey of Monmouth. In 1136 he wrote a book called Historia Regum Britannia - The History of he Kings of Britain in which he refers to a British King called King Bran Hen. Bran is a Welsh word for Raven. King Bran had requested that on his death in battlefield, his head be buried as a talisman against invasion on the White Mount where the Tower of London now stands. The ravens therefore came to symbolise the king and to this day they are accepted as necessary occupants of the Tower and the legend that should the ravens ever leave the Tower of London, the White Tower will crumble and a great disaster shall befall Britain. 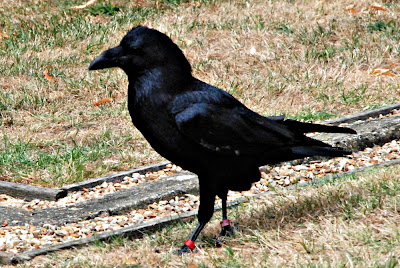