THE MYSTIQUE OF STONEHENGE

Huge stones sticking out of the earth to a height of over 30 ft in a semi circular horse shoe shaped formation in the middle of lovely green meadows - that is Stonehenge. Another must visit place when you are in London, the ancient Stonehenge leaves you full of questions on the origin and purpose of these stones. Stonehenge is an icon symbolizing mystery, power and endurance. There has been a lot of speculation on its original purpose , from being a sacred burial site for high ranking citizens of that age  to a temple for the worship of ancient earth deities and a place for human sacrifice . It has also been speculated that this was an astronomical observatory for marking significant events on the prehistoric calendar. One fact is certain, Stonehenge must have been something very important to the ancients to make them take this effort and investment to put up this magnificent structure.

Stonehenge as it is today
The ancient monument of Stonehenge  was built as a temple about 5000 years ago as a large earthwork with a circular ditch surrounding a raised bank with upright wooden poles. This was the new stone age or the Neolithic Age. 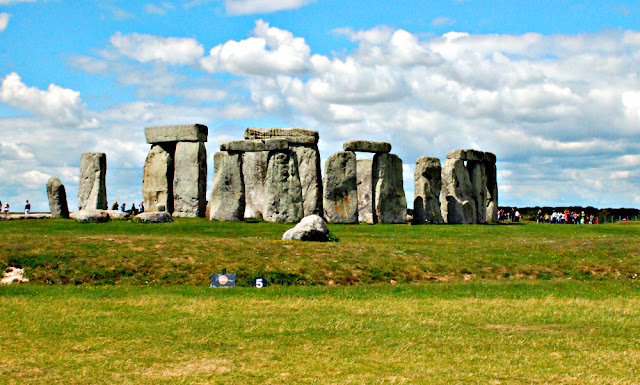 The Circular ditch around the Central area with the Stones
(Note the Station Stone in the foreground)
About 2500 years ago, when the wooden pillars had begun to rot, the first stones were brought to replace the timber. This 2nd stage of Stonehenge started around 2150 BC when some 82 blue stones from the Preseli mountains from Southwest Wales were transported to the site. These were believed to have been brought by sleighs and rollers and through waterways - travelling a distance of 250 miles. This also marked the beginning of construction and alterations that lasted over 800 years stretching into the Bronze Age. 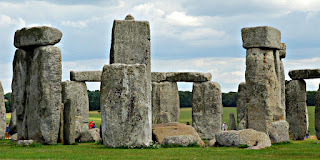 By this time, Stonehenge was the greatest temple in Britain, its banks, ditches and standing stones arranged in sophisticated alignments to mark the passage of the sun and the changing seasons. 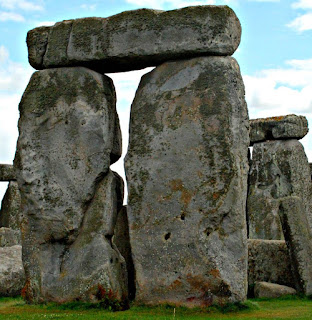 A great Sarsen stone trilithon
These are two massive upright stones capped by a horizontal Intel . This is one of the 5 that originally stood over here. 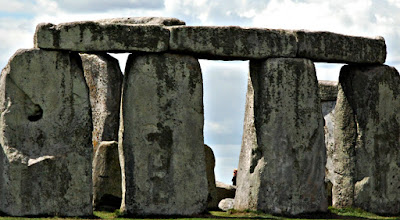 Part of the outer sarsen circle with the best preserved section of surviving lintels.
It is apparent that the sarsens were carefully trimmed and shaped before being set up in their positions. 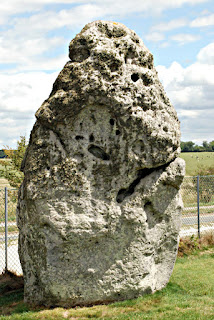 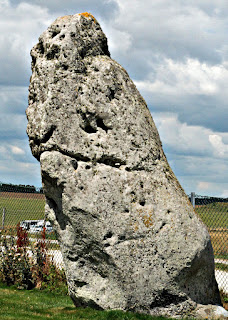 The Heelstone at Stonehenge
﻿About 250 ft from the centre of the monument on the northwest periphery of the circle is a single large sarsen stone known as the heelstone. This is about 8 ft in diameter and stands 12 ft above the ground. The purpose of the heelstone however still remains a mystery.
Some Facts about Stonehenge
Age estimated at 3100 BC
Location Wilt shire, UK
OS Reference SU 122 422
Type of stone Bluestone, Sarson, Welsh Sandstone
Worship Lunar, Solar
Access English Heritage - there is a charge to visit the stones.

Stonehenge is an easy 3 hours drive from London. There are numerous tours to Stonehenge during the day. Normally there is no access to the inner circle - however there are special tours on certain days at sunrise and sunset which allow one to go within the circle up close to the stones. However you need to book very much in advance to get a seat on one of  these tours. I was in London in August and every tour was full up even though I had tried a month earlier to get a booking.

Posted by pravine chester at 11:13 AM